The man, in the constant struggle for survival, produces large quantities of products to be stored, to be processed, transferred or consumed. By “stored products insects’ characterize those insects that attack also and non-food products in the stage of processing or storage. During storage, agricultural products, affected by various types of pests and diseases, which often cause considerable damage. According to calculations F.A.O. losses in finished product during storage amounted to approximately 17% of world production (10% of insects) and the quantities consumed by insects in storage and crops, only cereals could prevent famine in developing countries. It is estimated that the perfect and larvae of Coleoptera and Lepidoptera larvae devour a week weight product to a multiple of their weight. Only a larva of Ephestia sp., Eats the germ of about 50 seeds until the nymfosis. In addition to the quantitative damage, infestations of stored product insects and mites can cause health problems to consumers of these products. The presence of insects in the products that in procession stage or arrive in consumption is often linked to allergic reactions.

As woodworm, refer to insects feeding from the cell walls of the wood resulting in the weathering, reducing both the appearance and mechanical strength (termites, carpenter ants).

A common characteristic of warehouses and woodworm insects is the common chemical control .The control is achieved only with specific applications such as the use of fumigants (phosphine) or the less common manual configuration method the biological living conditions (CO2 environment).

Agrohealth company has experience in insect control programs warehouses-woodworm and may establish and preventive manipulations programs to reduce the likelihood of attack (termites). 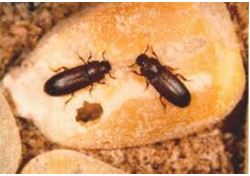 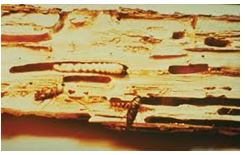 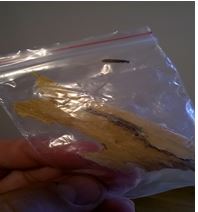